The Borror laboratory's collection of recorded animal sounds began in 1948 as the research tool of Dr. Donald J. Borror, professor of entomology at The Ohio State University, and his students. It is one of the oldest and most extensive in the world, exceeded in size and in taxonomic diversity in the United States only by the Macaulay Library at Cornell University’s Laboratory of Ornithology, and in taxonomic diversity by the sound collection of the Florida Museum of Natural History.

Funded by NSF (1997-2001) 22,050 recordings in the database were digitized. We invite you to learn more about the Borror Laboratory with the tabs below:

Donald Borror made over 14,000 recordings of animal sounds from 1948 through the 1980s. The medium that was available then was, of course, analog tape. 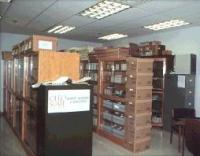 In a project funded by the NSF, the BLB copied Borror’s entire collection of recorded sounds from 1/4" analog tape to digital .WAV files. Multiple considerations prompted this decision.

First, we needed to preserve the collection. Many of the recordings were approaching 50 years of age, which is about the limit for analog magnetic tape. Other recordings, made in the 1980's, were on tape stock subject to "stick-shed," an undesirable state in which the tape is unplayable unless it has been baked in an oven to drive off absorbed water.

Another reason to digitize these recordings was that as the audio world has embraced digital technology, it has become more difficult and expensive to find and maintain analog equipment.

Finally, storage of the collection in a digital format offers several advantages. Digital media offer fast, random access to the data, unlike a tape which has to be wound to reach the desired location.

Digital media are not subject to the wear and tear of being dragged repeatedly over record/reproduce heads as tape media are. Initially stored on CDs, the collection is now housed on large capacity hard drives, which also facilitate working with and storing the collection.

Borror’s collection consisted of many reels of 1/4" analog tape, organized by species, with each separate recording (or cut) separated by segments of leader tape. This species organization of tape reels was an innovation of Donald Borror’s.

The recordings for some species were housed on single 7" diameter reels, while others, such as the song sparrow, required well over 100 reels.

During digitizing, a technician played the desired reel, one cut at a time, on a Studer studio tape deck connected into a computer interface.

We used an instrumentation-quality analog-to-digital converter (16 bit amplitude resolution, 48,000 samples per second) and RTSD ™ software to convert each cut to a separate, numbered computer file.

A scrolling spectrogram (see figure) was monitored as each cut was digitized. This helped avoid signal “clipping.”

Other custom-designed software was used to verify the quality of the digitization process and to add certain information (recording date, location, etc.) from the collection's database into a "header" associated with each digital broadcast wave format file.