History of the OSU Herbarium

We consider the official founding of the OSU Herbarium to be in 1891 by William A. Kellerman (from Kansas State College), the University's first botany professor. At this time the collection numbered approximately 5000 specimens, and included specimens that had been acquired at the university since 1874 for use in teaching. It was maintained in a Victorian building on the Oval known as Botanical Hall.

This building no longer exists and was at the site of the present Faculty Club, next to the historic Orton Hall. 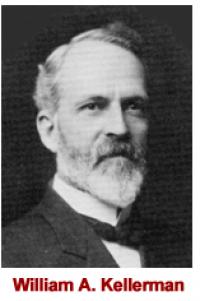 Kellerman worked to expand the herbarium, and soon divided it into two collections -- one for Ohio plants (the State Herbarium) and the other for plants from elsewhere (the General Herbarium). The two collections were physically separated until the late 1960's when curator R. L. Stuckey united them into one collection.

Kellerman's work on the Ohio flora resulted in the publication in 1894 (though dated 1893), with William Werner, of a Catalogue of Ohio Plants. Updates and revised catalogs were subsequently issued until Kellerman's activities shifted to studies in Latin America. The collections grew under Kellerman's care through their first 15 years, such that in 1906 a total of 21,911 specimens were recorded in the State Herbarium alone.

Kellerman began to make expeditions to Guatemala in 1905, which enriched the General Herbarium with much new exotic material,including specimens of fungi, in which Kellerman had a particular interest. In 1907 his Tropical School of Botany was approved by the University Trustees and he continued travel to Guatemala with students. 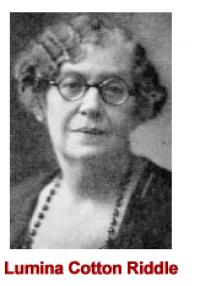 Unfortunately, Kellerman's career ended abruptly in 1908 when he died of "a tropical disease" on his fourth expedition to Guatemala. He is buried at Zacaba, in a cactus-fenced graveyard where only a slab of wood with his carved initials marked the site. One of Kellerman's students, Miss Lumina Cotton Riddle, was the first recipient of a PhD in Botany at OSU (1905) with her dissertation "The Development of the Embryo Sac and Embryo of Staphylea."

Upon Kellerman's death, the collection came under the leadership of his associate, Professor John H. Schaffner.

Schaffner had come to OSU in 1897 from the University of Chicago, and was well known for his studies of the life cycle and sexual expression of flowering plants, an important series of papers on phylogenetic classification, and his taxonomic work on Equisetum. He also took an active interest in the Ohio flora, publishing two catalogs (1914, 1932) and frequent updates in The Ohio Journal of Science. The collection continued to increase under Schaffner, and was moved in 1914 from Botanical Hall to the new Botany and Zoology Building on Neil Avenue (now known as Jennings Hall). 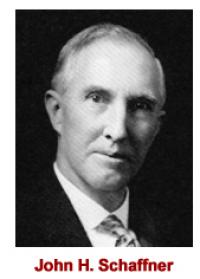 Schaffner died in 1939; at this time the State Herbarium numbered some 55,000 sheets.

Following Schaffner's death, Professor Clyde H. Jones was appointed Curator in 1941. He was the first faculty member to be given the official title of Curator. Jones continued the work of increasing the collections, adding to both the State and General Herbaria.

By the mid-1940's, the Herbaria saw little activity, due in part to World War II and to the failing health of Clyde Jones, who resigned the curatorship in 1948.

Dr. Clara G. Weishaupt was approached in 1949 to take on the position of Curator, charged with the rehabilitation and evaluation of the collections that had experienced deterioration during the past decade. Not trained as a taxonomist, and with no herbarium curatorial experience, Weishaupt learned quickly the methods necessary to rejuvenate the herbarium. 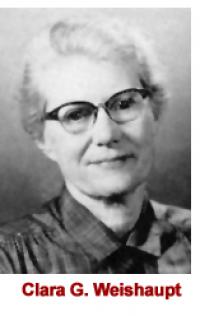 She focused on the State Herbarium, adding to its collection through her own field work and through the contributions of others. Renewed interest in the flora of the state was stimulated by the initiation in 1951 of the Ohio Flora Project, sponsored by the Ohio Academy of Science. The OSU Herbarium was to be the primary resource for this project.

During Weishaupt's tenure, two volumes of the Ohio Flora were published by E. Lucy Braun -- The Woody plants of Ohio (1961) and The Monocotyledoneae of Ohio (1967). Weishaupt's own research on the state flora resulted in the publication of her Vascular Plants of Ohio (1960), written for beginning students. Long popular in local flora courses in Ohio and neighboring areas, the book is still in use.

Subsequent focus on Poaceae, a family of obvious agricultural importance, led to her contribution of a treatment for this family to Braun's Monocotyledoneae volume, and to the publication of her Descriptive Key to the Grasses of Ohio Based Upon Vegetative Characters (1985).

Professor Ronald L. Stuckey assumed the curatorship of the collections in 1967, upon Professor Weishaupt's retirement from that position. Under Stuckey's leadership, the collection experienced continued growth and improvement. Old wooden cases were replaced with modern metal ones, the State and General collections were combined into one sequence, and Kellerman's personal system of organization of the herbarium was abandoned in favor of a contemporary phylogenetic sequence.

Types were identified and segregated, and specimen exchange and loan programs were initiated.

Professor Jere N. Brunken served as Curator from 1975-1979. In 1979 the administrative structure of the herbarium was changed, with the creation of a faculty position of Director of the Herbarium as distinct from a staff Curator position. Professor Tod F. Stuessy was first to assume the directorial position. Stuessy built the collection's current strength in temperate South American flora, was active in acquiring materials for the herbarium library, and was successful in developing relationships with the local community.

In 1980, Dr. John J. Furlow joined the staff as Curator, bringing his research interests in the flora of Ohio and in systematics of Betulaceae.

In 1992 the Herbarium, along with most of the other natural history collections at OSU, were moved to the current facility on Kinnear Road, creating the Museum of Biological Diversity. Also in 1992 OSU's lichenologist, polar botanist, and historian of science Professor Emanuel D. Rudolph died suddenly in an automobile accident; he and his wife Ann had generously arranged their estates to benefit Ohio State University, including the Herbarium, which was the recipient of an endowment fund and a large portion of the Rudolphs' enormous personal library, much of which is now housed in the Herbarium's Rudolph Reading Room.

Professor Daniel J. Crawford became Director on Stuessy's retirement in 1995, and continued to build the collection's strength in South American flora. In September, 1999, Professor John V. Freudenstein assumed the post of Director of the Herbarium. His goals include advancing databasing efforts to make the collections more broadly accessible, ensuring the care and quality of the collections, and increasing the institution's integration and service to the Columbus community and beyond.