Buckeyes are trees native to temperate areas in North America, Europe and eastern Asia. They are members of the genus Aesculus, in the largely tropical family Sapindaceae.

The Ohio Buckeye is Aesculus glabra Willdenow. It is a small tree with a short trunk and narrowish crown usually reaching a height of about 50 feet, but very old individuals may be taller. It is most easily recognized by its palmately compound leaves (with 5-7 leaflets arranged as fingers on a hand) and clusters of small, pale yellow flowers that occur at the ends of branches in late April to early May. 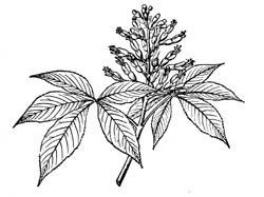 In native settings, it is usually found along river banks. It occurs throughout Ohio, which is near the eastern edge of its range, but it ranges west through Indiana, Illinois, southeastern Iowa and Missouri to eastern Arkansas, Oklahoma, and Texas. Today the Buckeye is not widely used by man except occasionally as a cultivated landscape plant and sometimes for its seeds, which are carried as good luck charms.

In the past, when large Buckeye trees were more plentiful in the forests, they were considered valuable timber trees. The wood, which is white, fine-grained, and moderately soft, was widely used for turning and for making small items of woodenware, such as bowls, spoons, handles, ornaments and boxes. Because it is easy to carve and resists splitting, it was once an important material for the manufacture of artificial limbs, and it was used for flooring, the bodies of wooden vehicles, and for inexpensive furniture.

The bark produces a yellow dye that has been used to tan leather, and the seeds were used as a source of oil for lamps, an insecticide, and bookbinder's paste.

Are there other Buckeyes?

There are 13 species of Aesculus currently recognized, occurring in temperate North America, Europe, and Asia. Six species are native to the United States.

Some are medium-large trees, but others, including the Red Buckeye (Aesculus pavia) of the southeastern United States, never become bigger than large shrubs. All buckeyes have large palmately compound leaves. In the spring they bear large cone-shaped clusters of flowers, which by midsummer give rise to greenish, leathery and often spiny fruits. When mature, the fruits drop from the trees and split open, revealing the large dark brown seeds ("buckeyes") inside.

Probably the most familiar other species of Buckeye is the one that is not even called a Buckeye -- the Horse Chestnut (Aesculus hippocastanum). It is also not a true chestnut (chestnuts belong to the genus Castanea in the oak family, Fagaceae). It is often planted as a street tree and is native to Europe.

Why is the Buckeye associated with Ohio and with OSU?

Ohio is known as the "Buckeye State," the Ohio Buckeye is the official state tree, and Ohioans in general, but especially those associated with Ohio State University, are known as "buckeyes." 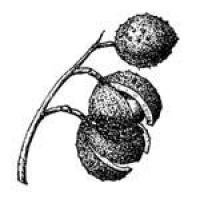 The origin of this nickname, which dates from early pioneer days, is not completely known. Ohio may have become known as the Buckeye State simply because many large, economically important buckeye trees grew in the Ohio region at that time.

Another possibility was proposed by the pioneer historian S. P. Hildreth of Marietta, Ohio, who told how Col. Ebenezer Sproat, who held the first court of justice in the Northwest Territory at Marietta in September, 1788, was given the name "Big Buckeye" by admiring Indians. According to the story, the nickname became known far and wide and was eventually associated with all the settlers of the region.

Still another theory, and perhaps the most credible, is that the name caught on in 1840, after Gen. William Henry Harrison began using the buckeye as a campaign symbol in his presidential quest. During the campaign, hundreds of buckeye walking sticks and canes were distributed, and buckeye log cabins built on wagons as floats appeared in parades in many towns and villages. These, together with an accompanying song calling Ohio the "Bonnie Buckeye State," firmly established a link in many people's minds between the state and the tree.

The Ohio Buckeye was popularly accepted as the State's symbol during the late 1800s and the first half of the twentieth century, but it was not formally adopted by the Ohio legislature as the State Tree until 1953, on the occasion of Ohio's 150th anniversary of statehood.

Today the Ohio Buckeye especially symbolizes Ohio State University, particularly with regard to intercollegiate athletics. But even at OSU the buckeye is a relatively new symbol.

During the 1920s the buckeye gradually assumed an unofficial role as a school symbol through references in the news media. In 1930, a recent OSU graduate, Milton Caniff, who later became popular as the creator of a popular comic strip (Steve Canyon), designed and began to promote a logo consisting of a buckeye leaf and several fruits. He continued doing this until September, 1950, when the University accepted the logo as its official symbol.

Today, this stylized buckeye emblem assumes a prominent place at the base of the University's seal.